Finally, I'm getting around to finishing up Christmas posts, only a couple of weeks late!  Our Christmas this year was very memorable and I think we can all say that we hope to never have another one like it!

A couple of days before Christmas there were weather advisories issued saying that there could be bad weather on Christmas morning.  About the time we went to bed Christmas Eve the rain was already starting and at times it was pouring down.  Kylie woke up a little before 6 hollering about the "booms" (thunder).  I tried to convince her to go back to sleep, but then when she asked to get up and see Maw and Paw, I decided we might as well get out of bed.  Maw and Paw already had the turkey cooking and getting things ready for lunch. It was dark, rainy, and lots of lightning.

We started opening presents and expected Kylie to just tear into them, but she took her time and wanted to play with each toy before opening a new one.  It took a very long time to finally get all the presents opened. 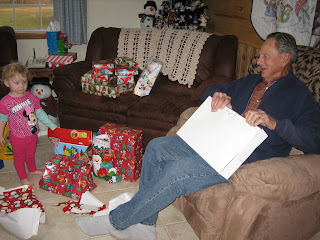 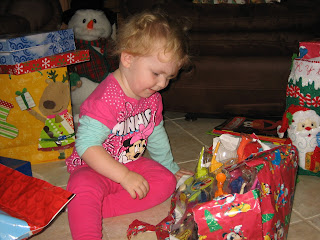 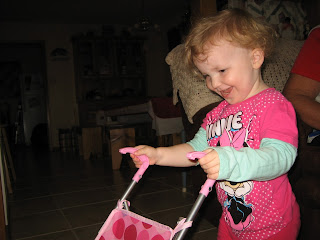 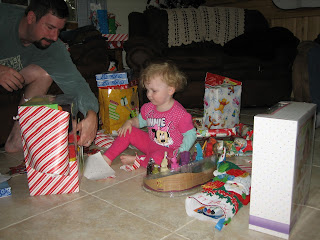 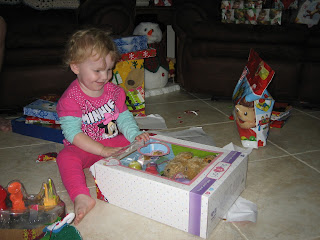 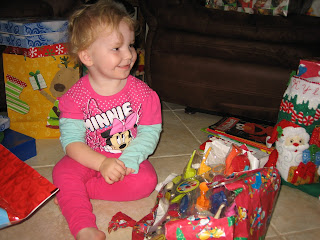 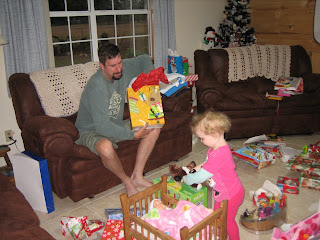 After opening most of the presents, we took a break to do a few things in the kitchen.  My mom's phone then had an alert about a tornado warning.  I checked radar and we were right at the bottom tip of the warning and of the storm, so we weren't too concerned about it.  My dad mentioned that if the weather got bad to go to their closet.  Not long after that, the weather seemed to get better, wasn't near as dark, and looked like things had passed over us.  Another alert sounded that the tornado warning had been extended and then the power went out for good, before that it had been blinking.

Chad, Kylie, and I were in the living room, talking and looking outside.  It seemed like all of a sudden the wind had gotten really strong and it was getting loud.  A chair flew off the back porch and Kylie hollered "Uh-oh chair fell down".  We still weren't realizing what was happening, and it was all happening so fast to really process it.  As I was looking outside and wondering just how much harder the wind could actually blow, the rain was already sideways, a big limb hit the window right behind Chad's head.  I then grabbed Kylie and ran as fast as I could to my parent's closet, didn't even have time to think, I just knew I needed to get her somewhere safe.  Everyone was right behind us (luckily they have a big closet and the presents had already been cleared out!).  It was dark, but someone was able to grab a flashlight so Kylie was perfectly happy playing with the flashlight while we waited until it was safe.

Kylie was never scared, she didn't have any idea what was going on.  I don't think we were even that scared at the time, I think it was after the fact that was more scary, when we actually realized a tornado had come thru.  As it was happening, it all happened so fast, we didn't really have time to be scared.

We eventually ventured out of the closet.  I then thought about her brand new car that was on the front porch and ran to go check on it.  Surprisingly it was still there and didn't appear to even be touched, luckily the tornado came thru the back and the front didn't have much damage and as strong of wind.  My parents house was fine, a seal broke on a window and a torn screen, but to the actual house, that was it.  There were a lot of things broken around the yard and everything was blown around, lots of limbs down, some big limbs, and even the top of a tree.  The roof off an old barn was gone and a lot of the things inside were scattered about, like my brothers old tricycle.  There was also a broken window and some damage to the roof of another building on their property. 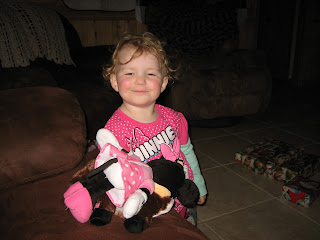 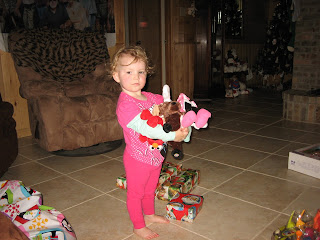 After the storm pics will be in the next post, this post was already long enough!
Posted by Alicia at 4:49 PM

That is so scary! I'm glad y'all were safe. I grew up in West Texas and we had a tornado go through our backyard, too. It was exactly like you said and we didn't have time to process what was happening. It was nearly over before we realized what was happening. I hope you never have to experience it again. I'm glad Kylie's car was ok, too. :)

Thanks. I'm hoping that is my one and only experience with a tornado! I do know that I will take the warnings a lot more seriously and be ready to take cover because once it hits there isn't time!! I felt silly caring about the car, but I sure was glad to see it right where we left it! She would have been devastated if something had happened to it.