So......we decided that Kylie was ready to start potty training and I had heard good things about the 3 day method and thought it seemed to make sense and decided to give it a try.  Who wouldn't want to be done with that in 3 days?!

Kylie had been used to seeing the potty chair for several months, would even sit on it all on her own.  She was telling us when she was going potty in her diaper and letting us know if she needed her diaper changed~not all the time, but enough that we were thinking we should try this whole potty training business.  We bought lots and lots and lots of big girl panties~Minnie Mouse, Hello Kitty, Stars, Hearts, Pink, and Blue ones along with others, those were just her favorites.

Day 1~told Kylie she was going to wear panties and no more diapers and to let me know if she needed to potty.  No more details needed other than I spent most of the day cleaning up and nothing ended up in the potty. 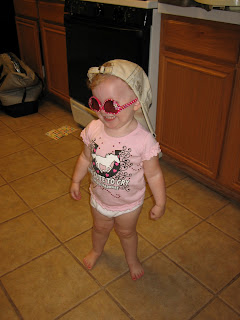 Day 2~was a lot more of the same, at one point I cleaned up over 4 accidents within 30 min~I stopped counting at 4.  I did manage to run her to the potty quick enough to get a drop or two in the potty.

Day 3~I had basically decided that I had come too far to go back to all diapers and that I would never be able to leave the house again and that she would be in diapers in kindergarten.  That day she did tell me "tee" as she was going and I got her to the potty quick enough to have some end up there.  That evening, my husband suggested leaving her bottomless so she could go in there on her own because I was really tired from running to the bathroom every 5 minutes all the time.  We checked after she was in there and she had used the potty all on her own!!!!!!  Lots of jumping, and clapping, and yelling, and cheering! 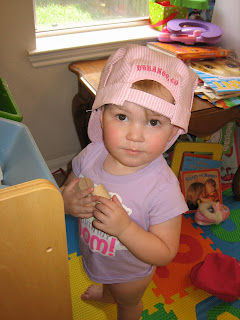 Day 4~had it's good moments and it's bad moments.

Day 5~I decided she had really good bladder control already, when she would feel herself start to go she could stop immediately.  At that point we would realize she needed to go and take her to the potty.  Then came the problem....she decided she no longer wanted to sit on the potty to go and would scream and cry.  Finally one time I just pretty much held her there (um, don't follow that advice if you are doing the 3 day method, that's not what you are supposed to do) and she went.  We rewarded with high fives (she loves that right now), yelling, clapping, etc and she was sooooo proud.  We then needed to run some errands and I wasn't about to leave the house with her in panties~another thing the 3 day training says is to never go back to diapers even for leaving the house/sleeping, etc.  Well, I had decided at this point the lady was a little bit nuts......We put a diaper on her, were gone for about 3 hours, came home, and her diaper was still dry!!!!  So, I made her sit on the potty and she went though she did cry, we celebrated after and all was good.  This was repeated all day the 5th day.

Day 6~she had an accident outside, I am partly to blame, didn't get to her in time.  Other than that she went all day without an accident, other than a couple of dribbles.  She will run to the potty and say "tee" when she needs to go and sometimes without us even asking.  I can tell now when she needs to, she starts dancing around and holding herself so I know when to start giving her reminders about the potty.  The one huge problem is that she cries when we make her sit on the potty, we have 2 different potty chairs and I've even tried letting her sit on the big potty and she cries with them all.  I would worry it hurts when she goes, but she  goes fine in a diaper without tears, so I assume we have a fear of going on the potty and not sure how we will overcome that.

We have offered rewards and when she actually goes in the potty then she gets a reward.  I have tried giving her special things to hold while sitting on the potty, that kind of works, but she still cries.  We have never gotten upset about an accident so I know that's not the problem.  As soon as she goes and then sees what she did in the potty, the crying stops and she is high fiving us and so happy.  I think maybe a little bit of stubbornness and some fear mixed in. 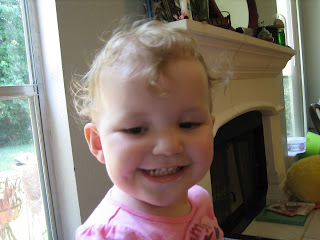 We are using diapers at nap/bed times, though she has been waking up dry from naps.  I am also planning to use diapers/pull-ups for a while when we go somewhere.  I'm proud of her progress and think she is on the right track, just if I could get her to stop acting like I am killing her when she has to sit on the potty!

As for the 3 day method.....it sounds good in theory, I know it has worked for some.  I just couldn't follow it perfectly and still stay somewhat sane!
Posted by Alicia at 10:36 PM

Alicia- Thanks so much for stopping by my blog! I wish you luck with your potty training quest- we were waiters... both our kids pretty much past 3 before we started. With our girl, she just kind of did it on her own naturally. With our son, it was about a month before he really got it- but he's doing great now! Good for you and Kylie- sounds like she is on her way! :)

Looks like you are right on track! So lucky! Julianna could care less if she pees or poops - she's always been like that. She is going to be a late one - we know that! Way to go Kylie! What a big girl you have become lately - first the big girl bed and now the potty! Congrats little cutey!

Oh Thank you for this post! I've been trying to get Chloe potty trained. Although, I think I've been sending mixed signals. I have her in panties during the morning and switch to diapers in the afternoon. I should probably stop that. Thanks for sharing your experience. It's encouraging!

Skye, it seems that Kylie has always done things on her own terms and often a little later than average, for example walking! We just felt she was ready to start trying with this and I think she is, it's just really hard! She is growing up way too fast for me!!

Kimberly.....ugh, isn't it frustrating?! When I tried before i did like you, panties in the morning and diapers in the afternoon just because I couldn't take it anymore! Finally, I decided to try the 3 day and just do it and no turning back. I have wanted to go back to diapers several times, it is easier. The day ended on a good note, she went potty close to bed time without crying as much! That being said yesterday I don't know that she went any on the potty. I think I just expected it to happen a little sooner than it has.