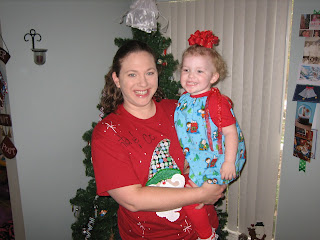 I can't remember if I've mentioned it or not, but we have an Elf on the Shelf this year.  He joined our family right after Thanksgiving and keeps a close eye on Kylie and then reports back to Santa Claus.  When I told Kylie about the elf and asked her what she wanted to name him she kept saying "Ewwww", well I wasn't having that name so I decided we could just name him next year!  Then Kylie started saying something and pointing at him, I finally told Chad it sounded like she was saying "Osh Kosh" and he agreed. So, our elf became Osh Kosh. A few days later, we were talking about Santa Claus and Kylie started saying what sounded like Osh Kosh once again, I finally realized that is how she says Santa Claus!  Isn't that just the cutest?!  I need to try to get it on video, though it's hard to record her saying what I want her to say! 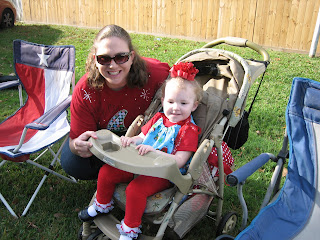 This past weekend, we went to a small Christmas Parade near us.  Kylie had so much fun and waved at pretty much everyone!  One cheerleader walked by and asked Kylie to give her five, which Kylie did, and then ALL the other cheerleaders had to come over to talk to her and give her five also, it was really sweet!  There was even a helicopter flying along with the parade and Kylie was thrilled about that.  I think we will make going to the parade an annual thing! 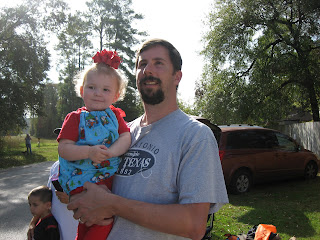 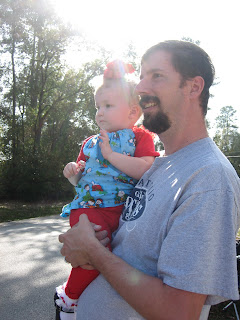 After the parade, we went to see Santa Claus.  For the past week, Kylie had been telling me no that she wasn't going to take her picture with Santa Claus.  Then after seeing her picture from last year she decided that she would sit on his knee.  She was very excited, up until it was almost our turn and then she changed her mind about it.  I think it was when she actually saw him that she chickened out.  You line up outside and then go inside his workshop for the picture.  Santa and Mrs. Claus are great, we went to the same place last year, and I'm sure we will keep going there for years to come.  They talked to her, but she wouldn't let us walk away.  Finally, Santa scooted over and told Chad to have a seat, so Kylie ended up sitting on Chad's knee next to Santa.  We tried and tried for a smile, but no luck.  She was puckering her lips up to keep from smiling, but at least she wasn't crying!  She was brave enough to tell Santa what she wants~a deer.  Yep, she's asking for a deer for Christmas!

After the picture, we went for lunch next door.  While we were eating, Santa came in~Kylie's face was priceless!  She stared at the floor and would occasionally look up to see where he was, it was pretty funny.  Thankfully he didn't acknowledge her, I think she would have freaked out if he had!

Saturday night we drove around our neighborhood looking at Christmas lights, she was so excited!!  She would holler "Oh, look, look, look" and then after she had looked at the house, she would point her finger and tell us "More" for us to move on to the next house.  It was so funny.

Christmas season has been so much fun this year, Kylie is at a great age for really enjoying the decorations and all the fun that goes along with it.  I can't wait to see her on Christmas morning, I'm not real sure if she actually realizes she will be getting presents, we've talked about it, but it's hard to know what she understands and doesn't.

Even more importantly, a cold front came thru last night and it's cold here today!  It's finally feeling like Christmas!  I was so tired of it being in the 80s and this close to Christmas, today is in the 40s, I'll enjoy it while it lasts!
Posted by Alicia at 3:43 PM

I've been waiting to hear the Osh Kosh story...I read your comment on Skye's blog. That is too cute! The last picture on your blog...Kylie and her Dad have the same look on the their face! Classic Kodak.

You're right, they do have the same look on their face! I was happy with the name Osh Kosh because I think it's just cute and then once we realized that she was trying to say Santa Claus then that made it even cuter :)

Ohhh osh kosh- there we have it! What a great name :)
And yeah forget trying to get her to say anything on queue LOL. Sometimes they just come out with crazy stuff and you can't plan for it :) hahhaa
The christmas parade sounds great! Whenever I read a blog and see pictures of people in t-shirts in winter time always makes me which it was warmer here! We are cold here. Brrrr. But you did get that cold front, so you get cold for christmas at least (I agree, it should be cold for christmas, but thats it LOL)
Julianna is the same way with santa - she admires from afar. Anytime we have gotten close to him, she gets very nervous and hides. haha. Maybe next year....

Oh and I was cracking up at how kylie wants a deer for christmas lol! That is great!

I hope it'll be cold on Christmas, but we never know in Texas! The weather report tonight said this weekend is going to be near 80, so the cold was nice while it lasted. Hopefully another cold front will come thru in time for Christmas Day!