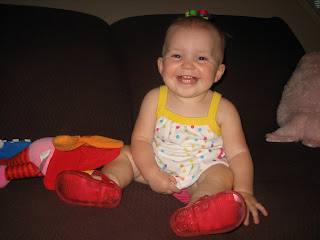 It's hard to believe that Kylie is already 15 months old!  She is learning so much and picks up on everything she sees us do or hears us say.

She had her 15 month check-up today and weighs 21 pounds 14 ounces and is 29 1/4 inches long.  The dr. said she looks great.  I asked about the reaction to ranch dressing, she said that she hears about it happening sometimes and that it is believed to be an egg allergy or an allergy to the preservatives in ranch.  She has eggs with no problem, so most likely the preservatives.  Eventually we will try it again and see if the same thing happens, but for now, we are staying away. 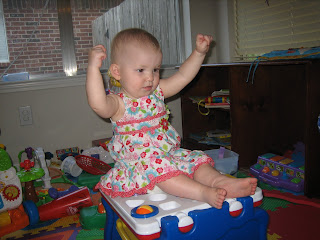 Kylie does so much now, I don't even know where to start....she isn't walking on her own, but as long as she can have one hand holding onto something then she will walk.  The dr. said that is normal and no reason to worry.  Kylie is a climber and climbs on anything and everything that she can, she's actually really careful and good at it, though it does still scare us!  She also knows how to get on her belly and slide down when she is up on something. 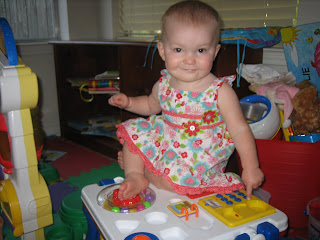 Kylie loves lining her shoes up on the windowsill, sitting in her chair, playing with anything that makes noise, reading books, stealing our seats anytime that we get up, putting things in containers, putting lids on and taking them off plastic containers/cups, chasing Kit-Kat, going outside, going shopping, baths, sitting in buckets (even ones that are way too small for her)....and so much more that I can't remember. 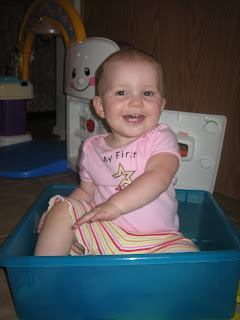 Her most used word is Bye-Bye, says it all the time and at bedtime she tells her daddy Bye-Bye, waves at him, and blows him kisses :)  Last night we were watching tv and the girl on tv had her hands up and Kylie waved at her!

Kylie points at EVERYTHING and wants to know what everything is.  She is so curious! Kylie seems to love animals and giggles when she sees them on tv....her 2 latest favorites are one for kitty litter and a Blue Bell ice cream commercial (giggles at the cows).  Kylie has some favorite shows she watches and gets so excited when they are on.  I always sing along with the songs, BUT lately Kylie is getting more and more mad when I sing and she will yell at me and give me a look!

Kylie has developed an opinion on what she wants to wear and will push clothes away that she doesn't like, I thought I had a few years before she would start with this.  Her tastes change daily, something she doesn't like today, she will like tomorrow, or in 5 minutes! 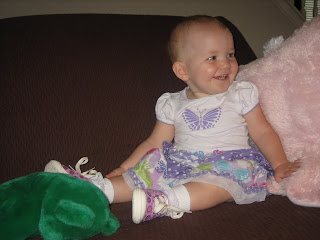 Kylie's still eating really well and wants a "bite" of everything we have, she doesn't always like it and shakes her head and will even spit it out or stick her tongue out for me to get it for her if it tastes really bad.  Lately some of her favorites are no longer favorites, there are just a few things that she's always guaranteed to eat, but at least she is willing to try different foods. 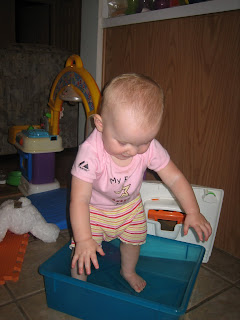 A week ago I would have said Kylie was sleeping horribly, but the last 2 nights she is back to sleeping really well.  I suspect it's the rest of the molars coming in, she has had such a hard time with teething, it's been hard on us all!
Kylie is very vocal and says several words that we are able to understand, I counted about 10 that she uses right now.  She understands a lot of what we tell her and will even go get something when we tell her to. 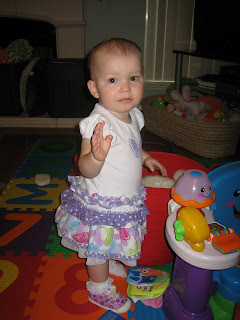 Email ThisBlogThis!Share to TwitterShare to FacebookShare to Pinterest
Labels: 15 months

WHat is it about lining things up? That is so funny b/c Julianna does the same thing. She loves 'arranging' things and can spend 20 minutes arranging just a few items so they are just perfect to her LOL! And I can't beleive she is pushing her clothes away she doesn't like LOL - that is too funny.
Good to know about the ranch dressing (bad to hear about the allergy!) - I will limit J's intake of that if it's served with anything... just in case! :)

ANd I can totally relate to the thing about her not liking something today and loving it tomorrow- so fickle at this age. THey are learning how to have opinions like you said!! LOL!