I don't think I have done a post of what Kylie is up to lately, so here goes! 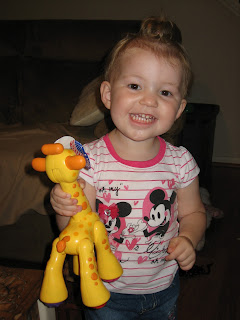 Kylie loves to count and is counting up in the teens now, though she does skip a few #'s here and there, seven is almost always skipped.  I think she has trouble saying it.  She can identify a lot of the alphabet and will even call out letters that she sees on signs in the store!

She pronounces the f sound as "fl" so it's floor, flive, flone  (four, five, phone).  I love listening to her talk!  Kylie talks all of the time, though a lot of it we still don't understand.  When she is talking to Chad or I, she puts her hand over her mouth as she is calling for us, we are still Mom and Dad, I try to get her to say Mommy and Daddy, but she's not having it right now.  I think she picked up the hand over the mouth from Mickey Mouse, when they call Toodles, they cup their hands around their mouth.  When Kylie is telling us something she likes for us to repeat what she said or somehow acknowledge that we know what she said, otherwise she will keep repeating it over and over and over and over... 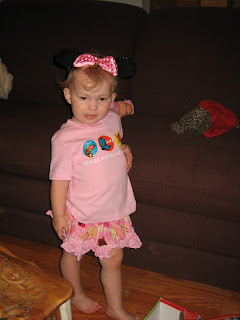 Kylie is attached to her 2 pillow cases, I substituted them for my nightgown a while back, and she always has her "plees" with her.  Aby (baby) is her best friend right now, though she has a lot of friends that sleep in bed with her.

Kylie's outgrowing all her size 5 shoes, so we're having to move on up to size 6.  I'm hoping some of her sandals will last a little longer, I don't want to buy sandals at the end of summer.  She is wearing 24 months/2T and even can wear a few 18 months.  She also has some 3T she is wearing.

Kylie loved watching The Olympics and has been doing gymnastics routines ever since, complete with throwing her hands in the air at the end and yelling "ta-daaaaaaaaaaa".  She usually throws a few push-ups in also while doing her dance :)  She loves to entertain!
Kylie's favorite tv shows are:  Mickey Mouse Clubhouse (Ka), Doc McStuffins (Doc), Sid the Science Kid (Sid), Super Why (Why), Bubble Guppies (Blow~I think because that's what she says when she wants to blow bubbles outside), Little Einsteins (she surprised me over the weekend by yelling to watch "Einsteins"!) and Sesame Street (though often times she will only want to watch Elmo's segment on there).

Kylie understand almost everything we say, we are always shocked at what she is able to understand and figure out.  We try to talk in code, but she is really good at figuring it out!

When Kylie wants a snack, she will go and get a bowl and bring it to me.  Once she is done with the snack, she will take her bowl and throw it in the sink, then come back and clap :)  As far as eating, she has gone thru a very picky stage, it was even to the point I was really worried that she wasn't eating enough.  Her eating is better, but we just never know what she's going to eat from meal to meal.  Kylie loves ice cream and we can't spell it or even hint around about having any or she will run to the kitchen yelling "ice cream".
Kylie is still doing great in her big girl bed!  One day at nap, I noticed on the monitor she wasn't in her bed, I went to check and she was standing at her gate clapping and cheering for herself.  It was pretty funny, but I had to act like I was really mad and got onto her for getting out of bed when she should have been napping.  I feel a little bit bad, but when she's doing something that could possibly hurt her, we tell her to be careful or it will hurt her toe and that is enough to usually make her stop. I told her if she fell getting out of bed she might hurt her toe so she needs to wait for Mommy or Daddy.  Earlier in the summer, she dropped a can of food on her toe and it bruised her toenail (which is now loose and probably will fall off soon) that was such a traumatic experience for her, she is so scared of hurting her toe again.

She has gotten out of her bed on her own one other time (that i'm aware of).  The other morning I was watching on the monitor as she was telling her friends good morning and playing quietly in bed.  Somehow Aby ended up falling out of bed, Kylie hollered "uh-oh" and then looked around.  She then went to the end of the bed, where the rail isn't, looked carefully both ways, crawled off the bed, ran and grabbed Aby, hugged and kissed her, then threw her back on the bed.  She then quickly climbed back in bed herself.  It was so funny watching her, she thought she had gotten away with something! 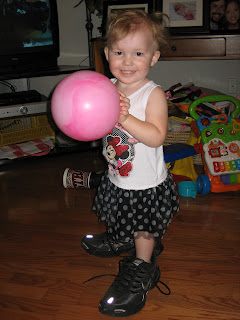 Great post- so nice to see what Kylie is up to - so similar to Julianna. We just started counting here too! And I am laughing at the ELmo part of Sesame street - thats all that Julianna likes too - and Abby's flying fairies. I have to try some of those other cartoons that kylie likes- We so far only have tried Doc Mcstuffins, mickey mouse (of course!!), Bob the builder, Thomas the train .... and there was one other I can't recall but it hasn't been on lately - the french bunnies (or dogs or whatever they were)

Team Umizoomi is another show Kylie likes. Yes, Kylie likes Abby's flying fairies also, but she doesn't ask for that, i don't think she knows what to ask for, either that or I don't understand when she does ask for it. If she sees it as I'm fast forwarding to Elmo she gets all excited and I stop for her to watch it.