A little late, having trouble keeping caught up lately.....Kylie is now a year and a half old!  She is getting smarter and smarter by the day :) 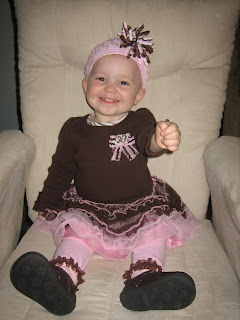 She says a lot of words, some are really clear and others you have to figure out what she's saying.  Kylie loves clocks, stars, cars, and balls and gets excited anytime she sees or hears one and will tell you what it is!  The last 2 times we have gone to Target she gets really excited and hollers "ba" while pointing at the big red concrete "balls" outside the store.  One time she was on the verge of pitching a fit because she was wanting to play with the "ball" and we weren't letting her.  Last night, we were at a graduation and she noticed a clock high up on the wall pretty quickly and kept telling us clock and pointing at it.

Kylie still loves animals.  Kit-Kat being her favorite.  I can tell her to say hi to Kit-Kat and she will wave and say "Hi", often when we leave she will also wave and say "Bye Cat".  Kit-Kat is still tolerating her pretty well. 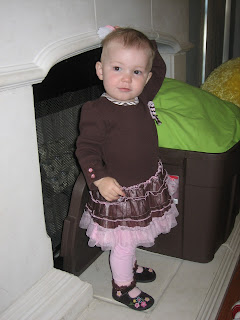 Kylie is doing really well eating with a spoon, she makes a mess, but she's able to do it and that's all that matters!  She still will try anything and likes most things that we eat.  The only time she gets something different is if it's something I think she will have trouble chewing or if it's really spicy.

Kylie loves to be outside. 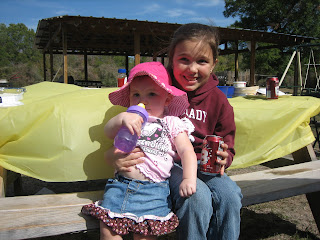 Kylie is able to point out several things in books and still loves to read books, magazines, junk mail...pretty much anything.

Kylie LOVES to write/color and is even happy with a pen that has the cap on it, she will just sit and pretend to write.  I bought her a small stocking stuffer sized magna doodle this week and she is in love with it!  We will have to get a real one at some point for her. 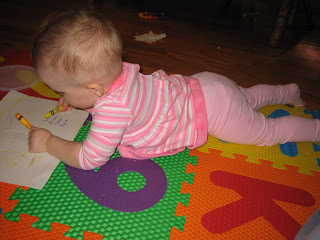 When she goes to sleep, either for a nap or at night, she has to have her star nightlight on and will keep saying "star" until I turn it on.  At nap time, I always have to explain to her that she can't see the stars because it's not dark enough, but I still have to turn it on and show her that it is at least on.
Posted by Alicia at 4:41 PM

so cute! she is getting so big!!