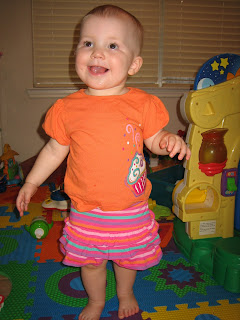 Kylie is now 16 months old and the most exciting thing that has happened is that she is finally walking!!!! You can view that video here.  She is still crawling most of the time, but she is walking so much now and is getting pretty fast at it also!  It won't be too long until she is walking all the time! 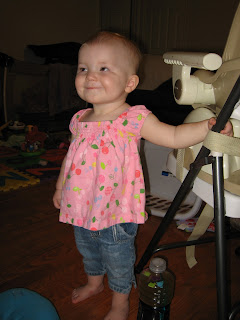 Kylie's hair is getting so thick, not really getting longer, but she has so much of it now!  It's light and doesn't show up well in pictures. 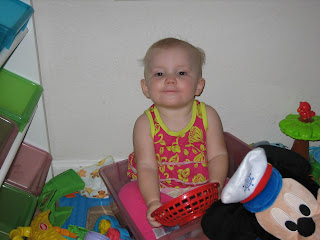 Kylie loves giving kisses and has started wrapping her arms around my neck to give hugs!  Whenever someone gets up from their seat, she walks/crawls as fast as she can to where they were sitting so that she still their seat.  She has been doing this for several months now, it is so cute and she giggles so loud while she's doing it.  Kylie could get away with a lot more if she didn't always start giggling and give herself away when she's doing something she shouldn't be!

Kylie is a climber. 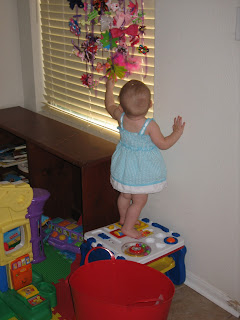 She LOVES clothes and will become obsessed and carry clothes around with her all day long, as I'm typing this she has a dress and 2 diaper covers in her hand as she's walking around playing with toys. 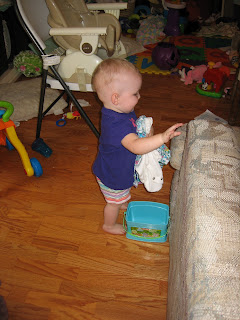 Kylie is picking up some more words and can usually get her point across if she needs something. Kylie is still a good eater, most of the time.  She does get picky at times and some days it doesn't seem like she eats anything at all, but for the most part she eats really good!  Kylie LOVES taking a bath and will play in there long after the water has gotten cold.
Posted by Alicia at 12:57 PM